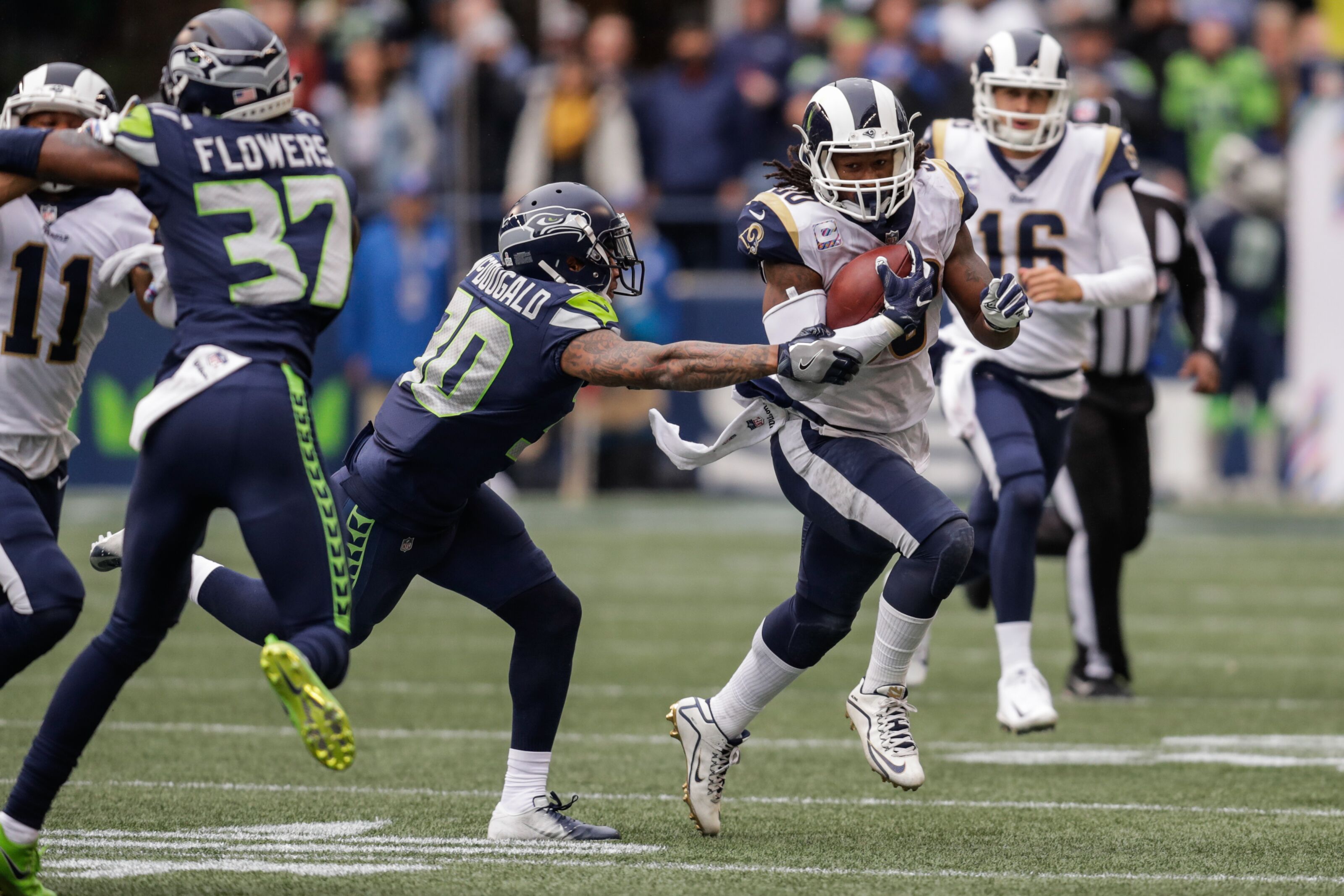 Well damn… last week did not go well for me. My picks were less stellar than all the picks we have put down in previous weeks. But, that does not matter, a fresh sheet mentality is what a winner needs to have, and I am confident in my ability to call games with the best of them. Good job by Drue and Anthony though as they tied for first place this week. They better enjoy it because I am GUARANTEED to win this week. Let’s get to the picks, shall we?

Rams vs Seahawks
This a juicy one on Thursday, who would have thought a Thursday game would be good?

The Seahawks really need this win tonight as they are tied with the Rams right now in record, but also have to deal with the undefeated (because of weak schedule) niners in their division.

This game will come down to the run defense for both teams.Donald is a beast, but the Rams defense has been leaky as a whole. The Seahawks run it down your throat and this one of the few teams that I would not want on any occasion at home.

However, I will go with the Rams tonight, purely because their biggest weakness the passing attack is not the focal point of the Seahawks offense.

The Rams offense can come out and score big early, this could be early sooner than we all expected.
Drue: Seahawks 31-27
Anthony: Rams 28-24
Tariq: Rams 42-28

Ravens and Steelers
The Ravens are slumping, dropping their last two games and the Steelers are coming off a momentum-building win last week.

Did I mention that the team they beat was the Bengals? Yea, the Steelers are not real and they did not let Mason Rudolph do much against the Bengals.

The Ravens need to improve on pass rush, but they boast one of the best secondaries in the NFL. That will get Mason Rudolph fits and should give Lamar and Ingram a chance to run the ball down the Steelers’ throats.

Nothing like slumping and beating down a poor team, to get your confidence back up (I am a Raider fan, so we are usually that easy team that everyone likes to get on track against).
Drue: Ravens 24-17
Anthony: Ravens 31-21
Tariq: Ravens 28-19

Bears vs Raiders
The Raiders got a big win against a solid, albeit injured opponent last week. I picked against them. I feel like I gave them a reason to do well. Now, I will do it again.

The Raiders have hell to deal with in the form of a motivated Khalil Mack (miss you baby), and the loss of the home game advantage will hurt.

This game will be played in London (the Raiders owner had to take a loss of a home game for the last few years to “thank” the NFL for helping him move the Raiders out of Oakland), and Mack will be enjoying crumpets in our backfield.

Now, if the Raiders did the unimaginable and stopped this amazing Bears defense, all they would have to do is put up a few scores because the bears are starting Chase Daniels.

Mitch was ass, but Daniels could not even beat him out. However, this is a lot of hypotheticals and I would be surprised if we put up more than 17 points this game. Bears win in a low scoring affair.
Drue: Bears 24-10
Anthony: Raiders 17-13
Tariq: Bears 21-10

Falcons vs Texans
Dan Quinn’s days are numbered if he cannot accomplish a turnaround soon. This won’t be the game he can do it.

Both teams are struggling, but the Falcons are taking struggle to the worst degree. Offensive play-calling has been lackluster, Matty Ice has been looking like Matty Lukewarm, and the defense is on its injured rampage (like every season).

If the Texans can execute to their abilities even at 50% they should have no problem winning this game. D Hop is due for a big game, and the Texans D-line should FEAST on the Falcon’s O-line.

I predict Dan Quinn has about two more games (likely losses) before his desk gets cleared.

Jets vs Eagles
Well Sam (I kiss strippers) Darnold is allegedly slated to return this week, and that will give the Jets a puncher’s chance.

Too bad that the team as a whole has not performed, not just the quarterback. The Eagles team came off a brilliant victory against a tough Packers team last week, and should just keep riding the wave.

The Jets have D2 level receivers at the wide receiver spots and the line is not getting any type of push for LeVeon Bell. Look for the Eagles to establish the run and get the can’t win J-E-T-S Jets Jets Jets, outta here this week.

Patriots vs Redskins
Do you honestly believe in the Redskins having even a sliver of a chance in this one? Does Dwayne Haskins get to throw less than 3 interceptions? If he even gets a chance to get in the game.

These are the questions that are actually being asked about the Redskins, AGAINST THE PATRIOTS!!! Patriots 100000-3 (my real prediction below, it is close to this).

Jaguars vs Panthers
The QB replacement bowl is here!!!!! Gardnew Minshew and Kyle Allen have both been impressive and had statement wins last week (I picked against both of course…)

Also, it is a battle of 2 good defenses as well. This will be fun to see which quarterback has more of the it factor as both teams as pretty evenly matched.

I am going to pick against Minshew Mania for the third time, because I believe the Panthers home field advantage will be enough to win this game.

Everyone is quick to forget, but Minshew did not look good that first half against the Broncos and he still has an arm that I cannot fully get behind. I do love me some strong-armed quarterbacks (oh god I sound like John Elway), and I believe we will finally see an end to this feel good story.
Drue: Jaguars 24-21
Anthony:Panthers 21-18
Tariq: Panthers 28-19

Buccaneers vs Saints
Who would have thought this would be such a huge game at the start of this year?

Famous Jameis has been on one these past few weeks, and he has even cut down on his turnovers. That shit alone should make Bruce Arians a candidate for coach of the year.

I did not think anyone could stop Jameis from throwing that dangerous ball, but Arians has helped him at least cut down on it.

The Saints have rallied behind Teddy Bridgewater and have won every game he has started this year. Call me crazy, but I like the Buccaneers in this one.

Shaq Barrett has been playing out of this world as well, and is currently leading the league in sacks. The defense should get back Devin White this week and everything is primed to go for a big upset.

Who Dat Nation loses a shootout against the Bucs.

Vikings vs Giants
Two quarterbacks trending in different directions. We already know who is trending down, it is like beating a dead bush.

Kirk Cousins needs to do well this game. He has shown little to nothing, so far and this is another game in which his team does not need him to win.

He should attempt shots downfield because the Giants secondary is worse than walking barefoot on pavement in a Texas summer.

Bills vs Titans
Two things I learned about the Bills from last week: they have a legit defense and they have a garbage offense.

Josh Allen looks lost when he gets pressured (beating a dead horse here), and the Titans are the weirdest team in football again.

We can never tell when Mariota wants to be average to below average, their receivers pick and choose when they want to run NFL level routes, and the play calling only opens up when nobody expects it too.

I am taking the Titans here, but nobody will be surprised when they burn me. Can’t wait to see where Mariota lands next year (cause it damn sure is not going to be with the Titans).

Cardinals vs Bengals
Someone is getting their first win this season!!! It is a battle of the garbage heaps as both teams have awful rosters all around.

I really want to go with Kyler to win this game, but there is not anyone on that roster, who can stop Joe Mixon.

The Bengals pound the ball to death and should win this game.

Also, quick mention I know everyone wants the Bengals to move on from Andy Dalton, and they should, but holy cow that O-line moves slower than molasses. I have never seen an entire team in the backfield as much as I did watching the Bengals play the Steelers.

Broncos vs Chargers
The Broncos are bad and they do not look like they have any signs of improving.

The Chargers are choke artist, who love to play down to their competition.

This will lead to some ugly football, that the Chargers will eventually pull the win out in the third quarter.

It will be interesting to watch the Melvin Gordon/Austin Ekeler touch split, but that will be the only thing interesting about this game. Snoozefest.

Packers vs Cowboys
This could be the game of the week as two evenly matched (star studded) teams battle each other coming off of disappointing losses.

The Packers need to improve in the red zone and the Cowboys looked lethargic against the Saints.

Cowboys need Zeke to be better as he looked slow and it didn’t help that he got no pressure behind their amazing line.

I think this game goes into the fourth and a game winning drive could be how this game finishes.

Give me the Cowboys in this game, because the Packers will most likely be without Devante Adams, and I do not see the Cowboys offense staying down for long. A-Rod on your team always means you have a shot, but I see him crashing in burning again this week.

Colts vs Chiefs
I am sorry, but if you let the Raiders beat you, then you have no chance against the Chiefs.

The Lions did something not many teams can say they have done, slow down Patrick Mahomes.

But, at the end he still went 80+ yards in about a minute and a half to set up the game-winning touchdown.

That is Mahomes Magic and the Colts are still missing some of their best players on both sides of the ball. Jacoby Brissett has played admirably, but he is extremely conservative and if you do not put out points against the Chiefs you have no way to win.

Chiefs by a landslide.

Browns vs 49ers
I cannot wait to see the 49ers lose. I will be singing it from the rafters, THIS TEAM IS NOT LEGIT!!!!!

The 49ers have beaten a bunch of nobodies, while the Browns have not been playing like the team we hyped them to be, they are still a solid team with a formidable pass rush.

If Garoppolo plays well, we have to give him his due credit. He will have to maneuver the pocket, and make precision throws.

The 49ers defense on the other hand is legit. Nick Bosa’s stats may not show it, but he is getting crazy pressure off the edge and the secondary is still being held down by father time beater, Richard Sherman.

Hopefully and I truly believe this, it will be a good game and an Odell breakout game.

I still hate how the Giants did him and I want him to put up gaudy numbers just so it hurts them.

Browns by the hair of their chins.