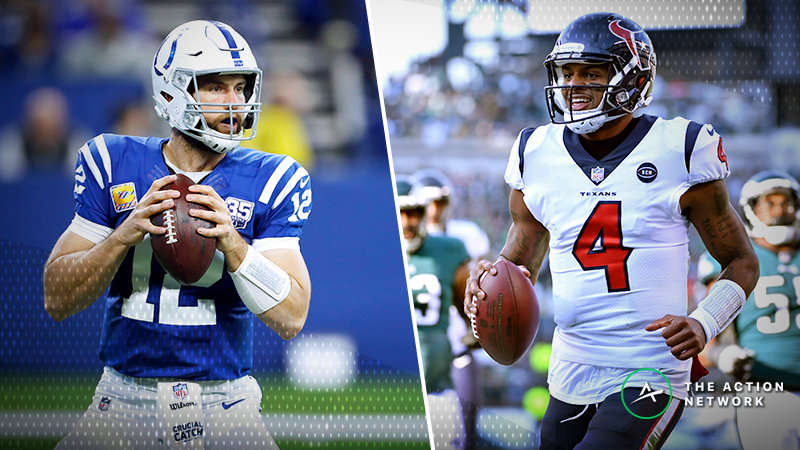 Similar to our weekly picks and predictions we will be giving you are predicted victors and the scores. However, we are doing much more analysis this time around. So enjoy Drue rooting for the Chargers while Anthony and I put down the Bears and Cowboys in hopes of a better draft pick for the Raiders.

It’s the AFC South’s divisional matchup for the third time this year, with the first two games being split between the teams. Deshaun Watson and the Texans take on Andrew Luck and the Indianapolis Colts. Both teams Aerial assault has been strong as both rank in the top 10 of the league. The Wide receiver plays has been great on the Texans side with Deandre Hopkins fighting for respect as the top receiver in the league. The loss of Demaryous Thomas will hurt, but the other receivers will and can step up. On the flip side TY Hilton has still been amazing with his speed, and new found TD machine Eric Ebron, the Colts are no slouch either.

One of the key matchup’s to watch is the Texans o-line versus the Colts d-line. The Texans O-line has been better of late, but they have let Deshaun Watson take numerous sacks and they have to deal with constant pressures as he looks downfield. Do it all linebacker Darius Leonard and company should look to blitz often to throw off the Texans offense. If the Texans can give Watson time, the Colts have been seen to get beaten deep.

The most underrated matchup to me is Marlon Mack and co. ability to get away from the swarming Texans defense. The Colts O-line has been impressive and the pass block has been there the most. Quentin Nelson had quickly added a toughness to the Colts line and that impact needs to be felt in order to give Mack time to get free and his elusiveness should also help. JJ Watt has returned to form and the Texans D-line has been formidable against the run. This will also determine how often the Texans pass rushers can dig down and attack Andrew Luck. IF its a pass only game early, it will be tough to stay in front of Watt and Clowney.

The Seahawks travel into AT&T to versus the Dallas Cowboys. The Cowboys and the Seahawks boast excellent defenses. But, the Seahawks have one thing that the Cowboys cannot dream of achieving. Having a Russell Wilson. Wilson is a big time playoff performer already lifting his team to heights unknown, and being a Super bowl winner already. Dak does not have the arm talent or the mobility that Wilson has and his inability to test deep has been helped along with the addition of Amari Cooper, but still not unleashed. The Seahawks have Bobby Wagner and KJ Wright in the middle patrolling to stuff Ezekiel Elliot and unless Dak can shine, the Cowboys could be in for a rough time. Not to excuse the Cowboys defense themselves, their young linebacker core has been phenomenal as we closed out the season. Also, the move to hybrid corner/safety has made Byron Jones one of the most feared defenders in the league. The Cowboys have the ability to limit Wilson, but in a low scoring slugfest, I want the Wilsons of the world to seal the game. Also, the 3 headed monster that is the Seahawks rush attack can quickly gas opponents, and the brawlers start making paths. This again should be a low scoring close game, but that is what the Seahawks want.

The Chargers face off against the Ravens as top tier offense versus top tier defense combat each other. Now our local homer Drue has been extremely excited and gives us is Chargers breakdown:

If my analysis is bad for the other games, I’m sorry but this is the game I’m focused on. It’s Friday and I’m already stressing and anxious for this game. First let me lay out my concerns for the Chargers: 1. Brandon Mebane is probably out and Jatavis Brown is out 2. The ravens just beat us 3a. The ravens pass rush 3b. Our offensive line is not good. 4. Did you see how bad they beat us two weeks ago?

Now let me say some things to make me feel better: 1. It’s on the road(we were built for this all year, our home games are filled with opposing teams fans) 2. We have Phillip Rivers(the dudes got heart and fire— key things you need in the playoffs) 3. We already played them.
It’s really hard to beat a team twice, that’s why I was scared to play the Steelers. This is the first time anyone has played Lamar Jackson a second time, he can’t catch us off guard. They know what we do, and we know what they do. Who do you think has more ability to adjust? The team with the quarterback who runs 17 times a game or the team who’s not afraid to let their qb throw the ball downfield.
I am also going to point out that Jackson has fumbled in every game he has played. You can’t give the ball away in the playoffs and I have no reason to believe he won’t do that this week.
Still I am very scared of this game and that may just be because I am a chargers fan and good things don’t usually happen for our team(I’m still convinced that Marvin Badgley is a bad kicker only because he plays for us, and he’s been excellent, but again it’s really hard to believe when you’re a fan of this team). Anyways I should say some good things about the Ravens. Nope I already convinced myself we are winning this game and I don’t want to write myself out of that belief. You’ll have to rely on Anthony and Tariq for analysis on the Ravens.

So, let me inform you on the winning team, the Ravens with counterpoints to what Drue said. Brandon Membane being out is huge, because it hurts your interior run defense and the Ravens want to grind it up the gut. Playing on the road, in a playoff game for one, is no easy task and the Ravens have some diehard fan. Phillip Rivers has been good all year, but he gives you that terrible YOLO ball more then anyone. Not to mention he is king of the lame duck balls. Finally,  the Ravens defense is still as superior as it was when they first played. I think Lamar has improved every game and he has especially got the ability to pressure the Chargers defense. What is a great way to stop elite pass rushers? Run it so they can’t run at you. This is another game that we all can lean either way, but I cannot deny the championship level defense the Ravens have.

Nick Foles and the returning Champs go against the Chicago Bears. Anthony had to delve into it so I can hide my bias:

If I were to choose the one game out of these four wildcard games that is most likely to be a blowout I would choose this one simply because of how inconsistent this Eagles offense and how dominant this Bears defense has been this season. If Big Dick Nick shows up for the Eagles then this game will be much more fun to watch but I have an odd feeling that the Bears are going to handle the Eagles with ease. This game will be in Chicago, their defense will be riding the intensity of the crowd and their bears offense should score enough points to pull this on off in the end.

Now, I agree that the Bears will be victorious, but you cannot count out the Eagles, Nick Foles has been an infusion for this team, and he has looked better and better every week as well. The Eagles did everything in their power to make the postseason, and they come with experience. The new to the post season scene, Chicago Bears, do not have that same experience and does not have the proven commodity at QB. The Bears have the defense though. The Mack, Jackson, and Smith core on all facets of the defense have been superb. They should be able to force turnovers and thoroughly limit the Eagles.